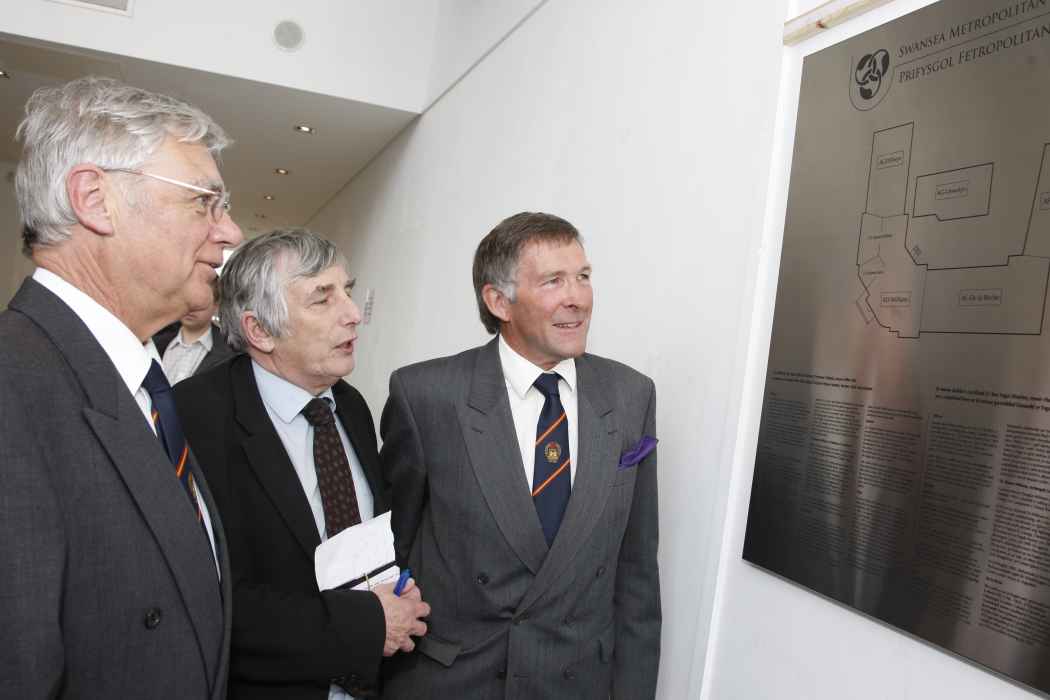 Webmaster David Tovey and Vice-Chancellor, David Warner join our President Dr. Brian Willis after he had unveiled the plaque at the Naming Ceremony
Photo courtesy of Rob Mitchell – S.M.U.

During the Association’s 2004 AGM, Professor David Warner announced that he was seeking suggestions for the naming of classrooms and practical rooms within the still being constructed Dynevor Campus. He suggested that names from former Dy’vorian pupils, headmasters and masters could be considered and this was regarded by all present as a tangible link between the old school and the new Dynevor Centre.

After great deliberations it was decided that it would be appropriate to name the key areas within the Dynevor Campus after the former Dynevor House Names, names that would be known and regarded with nostalgia by all former pupils and masters of the old school. In addition the name of a former pupil was submitted who is known today on the national and international stage and that is, of course, Dr. Rowan Williams, Archbishop of Canterbury.

It is the hope that these seven names will feature in future students’ nostalgia and, to this end, our webmaster gave a brief presentation to the assembled students and staff and Old Dy’vorians to provide some background to the names chosen:- Williams, Roberts, Burns, De la Beche, Grove, Dillwyn and Llewelyn. The majority of Old Dy’vorians present were surprised to learn of Burns and De la Beche but it was explained that these two House Names had originally been employed by Dynevor School’s predecessor, the Swansea Municipal Secondary School, in addition to the four Names known to Old Dy’vorians.

The names have been assigned to five areas within the campus and its two lecture Theatres. Our President, Dr. Brian Willis was invited by Professor Warner to unveil a plaque ilustrating the location of the areas and lecture theatres in a brief ceremony in the foyer of the newly named Williams Tower Block.

Read about the Dynevor House Names